1.    The Honourable Minister of the FCT, Malam Muhammad Musa Bello has entire management and staff of Africa Independent Television AIT on its 25th anniversary celebration.

2.    Malam Bello said that AIT, as one of the pioneer private television stations in Nigeria paved the way for what has become a very vibrant industry that forever changed the broadcasting landscape in the country.

3.    He congratulated the founder of Daar Communications, Chief Raymond Dokpesi for his vision and commitment to excellence saying that the  African Independent Television, (AIT) and its sister station,  Raypower FM have transcended beyond  companies into institutions and urged the management of AIT to keep up the good work while wishing it the best in the years to come.

4.    He also commended AIT for being a model corporate citizen of the FCT and for its contributions to the development of the nation’s capital.

5.    He wished the management and staff of AIT very hearty celebrations and the best in its activities of promoting good quality broadcasting in Nigeria. 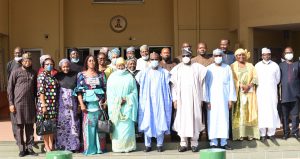