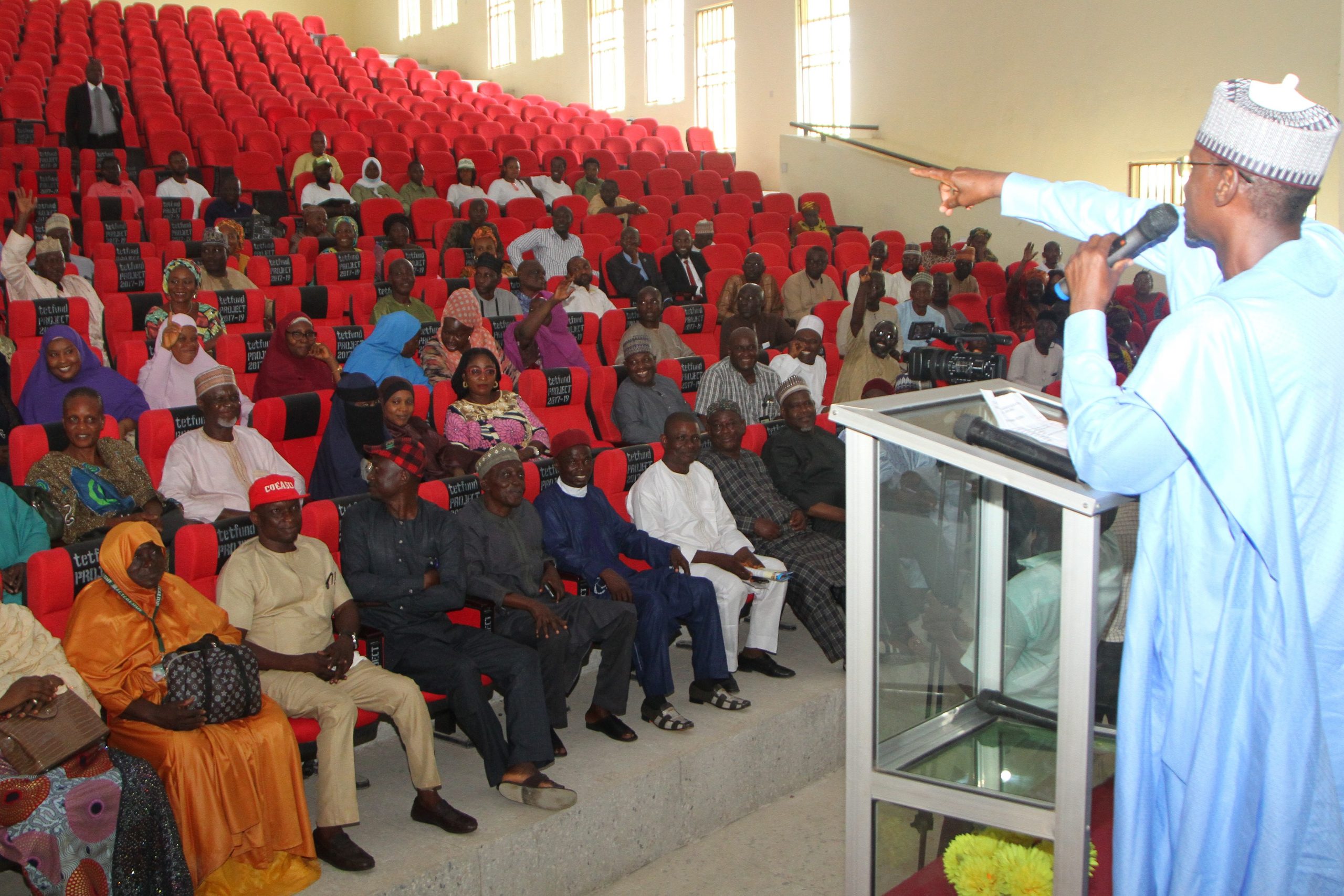 FCT Minister, Malam Muhammad Musa Bello addressing staff of the FCT College of Education Zuba at the 1200 capacity Muhammad Gambo Hamza hall of the Institution during his inspection visit to institution.

1.    FCT Minister, Malam Muhammad Musa Bello has paid an inspection visit to the permanent site of the FCT College of Education Zuba and commended the quality and scope of infrastructural development at the institution.

2.    The Minister was led on the tour around the campus by the Provost of the College, Dr Muhammad Gambo Hamza and other principal officers of the institution.

4.    He said “All the projects by TETFUND were pursued, and granted due to the singular efforts of the Provost. It is because of his strength of character, capacity and above all, his ability to reach out in all areas.

5.    And when the history of the College of Education, Zuba is written in future his name will feature prominently” The Minister added. The Minister, thereafter, through a motion supported by all, proceeded to name the newly built 1200 capacity hall after Dr Muhammad Gambo Hamza.

6.    Malam Bello also commended the management staff and students of the institution for maintaining a high educational standard, saying that the quality of the output of the FCT College of Education has been acknowledged nationwide and urged them to ensure it is sustained.

7.    He equally commended them for maintaining a harmonious working relationship within the institution as well as peaceful co-existence with the host community of Zuba.

8.    He also extended the appreciation of the FCT Administration to TETFUND and pledged the Administration’s continuous support for the growth and development of the institution.

9.    Earlier in his welcome address, Dr. Gambo Hamza acknowledged the Minister’s continued efforts at creating a conducive environment for the College’s well-being and existence.

10.    According to him, the College has received priority attention from the FCTA in staff training and development, as 101 staff, comprising of 54 PhDs and 75 academic and administrative staff, have been within and outside of the country.

11.   The Provost stated that the College has increased its academic and professional relationships, saying that it has signed an MoU with the Ahmadu Bello University, Zaria for award of bachelor degree programmes in seven departments and has obtained the requisite NUC approval.

12. He added that the College has also established a mutual collaboration with the Independent Corrupt Practices Commission (ICPC) to fight corruption on the campuses, even as it has set up students’ anti-corruption vanguard to fight education-related corruption practices.

13.   Dr. Hamza however appealed for the Minister’s intervention in the speedy completion of ongoing projects, especially the completion of the schools of education, sciences, vocational and technical; as well as access road.

14.  The Provost disclosed that, the College, which was established in 1997, has current students’ enrolment of 7,224, a total graduate output of 22,296, and has full accreditation for its 29 academic programmes.

15.   Registrar of the College, Dr. (Mrs.) Grace N. Tyoden, in a vote of thanks described the visit by the Minister who is also Visitor to the institution as “historic and a huge encouragement”.

16.    The Minister was accompanied by his Chief of Staff, Mohammed Bashir  Mai-Bornu, THE Executive secretary, of the FCDA, Engr. Shehu Hadi Ahmed, FCTA Education Secretary, Hon Sani Dahiru El-katuzu, and other senior officials of the FCTA.