L-R) FCT minister, Malam Muhammad Musa Bello, Head of the Civil Service of the federation, Dr Yemi Folshade Esan, and the Permanent Secretary, FCTA, Mr Olusade Adesola during the flag off of the rehabilitation of the Federal Secretariat, Phase one on Tuesday 98/11/ 2022 in Abuja

1.    The Federal Capital Territory Administration has begun renovation works on the Federal Secretariat Complex Phase One in Abuja.

2.    Minister of the FCT, Malam Muhammad Musa Bello, who flagged off the rehabilitation project on Tuesday, 8th November, in a brief ceremony at the Secretariat complex described the exercise as a milestone in the efforts by the FCTA to rehabilitate public buildings and infrastructure in the FCT.

3.    The Minister noted that the Federal Secretariat Complex, like many other public buildings in the FCT was constructed 30 years ago and required rehabilitation.

4.    He also noted that the exercise is the culmination of several discussions with the Head of the Civil Service of the Federation who was very passionate about the provision of conducive working environment for civil servants.

5.    Speaking on funding for the project, the Minister admitted that budgetary provisions were indeed a constraint and called for concerted efforts to ensure adequate funding.

6.    According to the Minister, “This phase of what we are doing is just a tip of the iceberg in what needs to be done. We have to all work together to get funding to rehabilitate this building and all the other public buildings in Abuja”.

7.    The Minister further disclosed that the current FCT Administration has spent most of its time completing ongoing projects and is now trying to rehabilitate the roads that were built 30 years ago. Failing to do this, the Minister said, will make it difficult to derive utility out of the existing projects.

9.    Earlier in her remarks, the Head of Civil Service of the Federation, Dr (Mrs. Folashade Esan, commended the FCT Administration for working to ensure that the environment where civil servants spend most of their time is conducive with the added benefits of increased productivity.

10. The HOCSF, who expressed delight that this phase of rehabilitation project is dealing with critical wet areas like conveniences, called on the construction company, Julius Berger (Nig) Plc to ensure that it is completed in good time.

11.   Speaking at the event, the Executive Secretary, Federal Capital Development Authority (FCDA), Engr. Shehu Hadi Ahmad explained that the Federal Executive Council, after due process, graciously approved the award of the Phase 1 of the contract to Messrs. Julius Berger Plc at the sum of N8,110,665,676.79 with completion period of 24 months.

12.  Engr. Ahmad further disclosed that the contractor has mobilized fully to site and commenced work, while government has met up with its financial obligation to the contractor as at date.

13.   He added that the rehabilitation work would be carried out in phases to ensure that government activities are not paralyzed as work goes on.

14.  Explaining the scope of work of the project, the Director, Public Buildings in the FCT Administration, Architect Adebowale Ademo, disclosed that the phase 1 involves the rehabilitation of the wet areas, conveniences in all the floors, construction of new lifts, painting, and repairs of pervasive leaking roofs across the building among others.

15.  Project Manager, Julius Berger Plc, Mr. Oliver Berger who commended the Federal Government for committing to the maintenance of public infrastructure, assured that the company will, in conjunction with the users of the building, ensure that all works are carried out successfully while still providing comfort to the civil servants at work.

16.  Other officials present at the flag-off ceremony include the FCTA Permanent Secretary, Mr. Olusade Adesola, the Chief of Staff to the FCT Minister, Malam Bashir Mai-Borno, and senior officials of the FCTA and Office of the Head of the Civil Service of the Federation 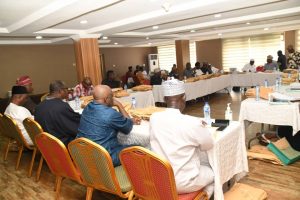